As two young girls travelling, you are put into a box, and that box is the Kiwi Experience bus. This is not to criticise Kiwi Experience or other touring groups. For lots of people it’s the perfect way to travel – hitting all the top spots with a group of like-minded individuals. It makes life easier and can be incredibly fun. However, it’s frustrating when people assume that all young travellers want the same thing (to avoid locals on buses), and that we are willing to pay for the easy way.

When we started planning our trip to Abel Tasman National Park, an expensive tour seemed like the only option. It was roughly NZ$1000 for a 3-day trip. This was beyond our budget, and it wasn’t even what we wanted – we imagined exploring the park at our own pace, with the freedom to chose our own lunch-spots. After hours of trawling through google searches, we came across the New Zealand Government website. Here we could book our hut accommodation for each night (NZ$300 for 4 nights/5 days), and download a simple map of the coastal track. * When you are in one of the most beautiful parts of the world, NZ$75 for a night in a hut is an absolute steal. † We then just needed to book a bus to the start of the track (Marahau), and hire a sleeping bag and gas cooker (all done from Nelson). 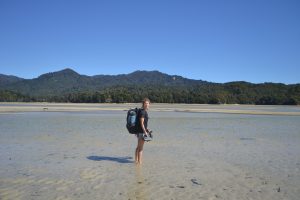 But even people we met along the walk seemed surprised that two young girls were doing the full 5-day track, carrying our own gear on our backs. Yes, some of the hills were hard work and the bags caused minor shoulder strain. But that’s part of the experience. And swimming in the bluest water imaginable is only made better by weary legs and the prospect of instant noodles. Sometimes the easiest route isn’t the best, whether that’s a package tour which drops your bag at every location, or a hop-on-hop-off bus which allows you to escape interaction with anyone dissimilar to your home friends.

Of course, everyone enjoys different experiences, and sometimes a tour guide is exactly what you want. This is just to say young travellers don’t have to be “the Kiwi Experience kind of girls” (quote unnamed travel agent) – the implication being we need a certain level of comfort. Sometimes it’s about making the most of the freedom travelling gives you.

*Map not needed – it’s one long path with signs!
†Camping available for NZ$30 a night.

There is a generally accepted thought in the UK: If you want a cultural trip, New Zealand is not the place to come. But Lori Leigh’s play, performed at the Circa Theatre in Wellington, has shattered this assumption. And she’s shattered it with a foam penis.

Leigh has produced a genuine masterpiece, ‘Uneasy Dreams and Other Things’, based on Kafka’s The Metamorphosis but with a feminist twist. Worn down by her sexist boss and soul-degrading job at ‘Media Monsters’, the protagonist Sam wakes up one morning with a penis. As she starts to deal with this transformation, Sam begins a journey towards living in a state of “becoming” – as herself and in the moment.

This play touches on some of the most important social issues of the present: gender, sexuality, and mental health – particularly the psychological damage caused by the media. The surreal story and poetical script bring these issues into the realm of fantasy. But the authentic characters keep it grounded. Through the ways in which the characters deal with her transformation, the makings of the modern patriarchy are laid bare.

It is a play which asks us to look forwards. How do we define gender in the modern age? How can we live our lives imaginatively and as ourselves? Leigh approaches these philosophical questions through poetry and comedy. The characters deal with this bizarre event in such a human way; all are, at the same time, loveable, hateable and relatable. ‘Uneasy Dreams and Other Things’ is not only amazingly creative, in both script and production, but also hugely important.

So, although there may be parts of New Zealand which are socially “behind the times”, Wellington leads the fight against that. The ambitious art exhibitions in The City Gallery are another testament to this. My other best recommend would be The Lighthouse Cinema just off Cuba Street. It shows a range of blockbuster and arthouse films, and the seats are like sofas. Tuesdays are cheap days (NZ$11). About to dive into the wilderness of the South Island’s west coast, Wellington’s cultural gems are sure to be missed.

To start, a quote from The Hobbit, watched on our flight from Hong Kong to Auckland (flight 2 out of 3). Gandalf says to Bilbo: “The world isn’t in maps and books. It’s out there.”

Hayley and I aren’t venturing through goblin-infested lands to steal a magical stone. But Gandalf answers the question that lots of people have been asking me, and that admittedly I asked myself a few times: “Why are you going to New Zealand?” (and what they’re really asking is: “Why aren’t you getting a job?”).

People still underestimate the value of travel. They have clearly never moved to the other side of the world with a truly awesome friend and made a life for themselves. We may not be facing the same toils as Bilbo Baggins, but the last week has proved we are on our own kind of unexpected journey… We came with a plan to find a job and flat in Wellington, taking trips on weekends. We are now moving to a small town on the West coast of the South Island called Greymouth to work in a hotel, travelling via Abel Tasman National Park on a 5-day hike. And it was not a simple road to this point. But keep a good humour and a good nature, and not only will everything work out fine, but you’ll have an insanely good time.

A week into our life in Wellington, proof of Gandalf’s wisdom could not be plainer. No amount of Lonely Planet reading could have given us a sense of this small and lovely capital. Initially we felt underwhelmed – its status as a capital city is definitely misleading. But a week in and I’m blaming that initial low on the human desire for instant satisfaction. And perhaps the haze of jetlag. I expected the city to fulfil my hopes and dreams within 3 hours of arriving. But Wellington is a city in which to spend time and enjoy living. It may not have a long list of “must-see” sights to be recorded in a photo. In fact, the first information leaflet we perused listed the same library twice in the city’s Top 10 Attractions. But Wellington has a bounty of places which just make living great. A personal favourite is the Karaka café/bar by the water – sit on a beanbag with a pint, wearing a sunhat* and enjoying the view, and you’ll wonder why you might live anywhere else.

So why are we leaving Wellington? New Zealand is a country to be travelled. By staying in one city, we wouldn’t be playing to the country’s strengths. A Working Holiday Visa is designed for short-term work, followed by incredible adventures. But the great thing about being away is that every day is new and one to be remembered. So keep reading here if you want some helpful travel advice for New Zealand, and any persuading that making the trip is a fantastic idea!

*Bring sun-cream – the UV is much stronger here! 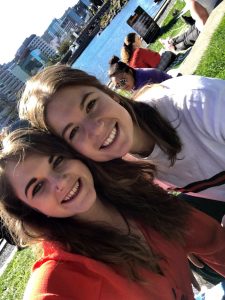